The word Kendo is of Japanese origin and means 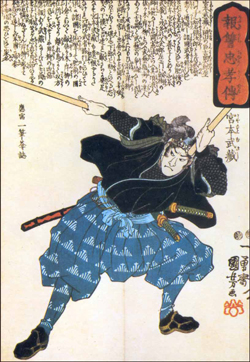 The way was originally referred to as way of life. To follow the way of the sword , it simply meant to earn his daily bread by the handling of the sword , hence belonging to the warrior caste. Only its members were allowed to wear a sword . Later influences through Buddhism onto the path as a way to enlightenment or to self-improvement did not result in contradiction. The original concept was constantly expanded through the reflection of dealing with death. Miyamoto Musashi (1564-1645 , pictured with two bokken) who attained enlightenment by the practice of swordsmanship, repeatedly emphasized the importance of ceaseless practice to perfection.

Sword is synonymous with Katana, the slightly curved Japanese sword that is only sharp on the convex side. It is considered as the highlight of blacksmithing that has not been reached so far again. The Katana was extremely sharp. Cutting an opponent from top to bottom into half did hardly require any physical strength, but only the clear and smooth handling of the blade while keeping the cutting line.

Today’s Kendo was developed in the mid-18th century. The kendo armor was introduced that consists of Men (helmet), Kote (gloves), Do (breast protector) and Tare (hip protector), and the fencing sword made of bamboo, the Shinai. The practical training and the competition training no longer only focused on the learning of the Kata forms, but also included sporting rules. The armor protects the allowed body areas where points can be scored. Although Kendo is a full contact sport, it is one of the sports with the least risk of injury. In 1911, Kendo was listed as an official school sport for all schools for the first time and thus laid the foundation for the modern Kendo.

1912, the Japanese Budo Association unified the so far wide variety of Kata forms and reduced them to the usual 10 basic shapes – the Nihon Kendo Kata – that we know today. Kendo was gradually modernised and became so widely used as a national sport that it was also applied for military purposes in World War 2. Hence, it was banned by the Allies after the war. The peace treaty of 1951 and the associated recovery of independence allowed kendo to return. In October 1952, the new Japanese Kendo Federation was founded. However, the state was initially promoting Kendo very cautiously and only in the early sixties, it became compulsory Budo subject at the schools, again.

In addition to the recorded course content at a school, the tradition of ‘kuden’ or spoken word developed that included the deeper teachings of a school and was only transmitted verbally from teacher to student. In some schools, this tradition is kept alive up to the present day.

From the 17th century Kendo was an essential part of the training of the Samurai, the Japanese knight . At that time Kendo merged with the concept of Bushido (way of the warrior) that is an important part of Japanese intellectual history and required in addition to pure technique the formation of a spiritual force. The merger of Kendo with the teachings of Buddhism, as well as with the ones of Confucianism reached its peak in the mental training. This meant for the education of the Samurai to also pursued objectives such as human love, justice, courtesy, wisdom and loyalty.

In 1911, Kendo was introduced as the official school sport for all schools for the first time and thus laid the foundation for the modern Kendo. 1912, the Japanese Budo Association unified the so far wide variety of Kata forms and reduced them to the usual 10 basic shapes – the Nihon Kendo Kata – that we know today. Gradually Kendo was modernised so that it could become a popular national sport. Kendo was also placed into the military live, so after World War 2 it was consequently banned by the Allies. The peace treaty of 1951 and the associated recovery of independence allowed kendo to return.

Now, children and women began to learn Kendo. Moreover, Kendo started growing popularity outside Japan and is being offered as an activity in over hundred thousand places across many countries . This internationalisation was especially expressed in the world championships , which are organised every three years by the FIK (International Kendo Federation). Today, Kendo – a non-gender and age-related martial art – is widely trained not only in Japan but also in many other countries.

In Germany, the interest in Kendo is steadily growing, too. Well trained kendoka achieved good performance in German as well as European and World Championships . As much as it has been adopted into its sporty and modern character, it is important to understand the developments of Kendo and then incorporate this understanding into the fight. This also includes the Japanese Samurai thought of applying familiar psychological moments like directness, unity of will, spontaneous decision and enforceability into the fight. Not surprising, these Samurai elements are up-to-date to our today’s living and we can learn these from modern Kendo.